Dipping your toe in will not grow your bookkeeping business.

While on holiday in Europe recently, as Neil and I rested on a beach, I noticed a couple walking to the water’s edge. They tiptoed into the water up to their ankles then turned and walked back to sit on their towels. The curious thing was that they repeated that several times during the afternoon. Although it appeared they wanted to enjoy the refreshing experience of diving in, for some reason they chose not to. On the other hand, we had decided before we arrived at the beach that we were diving in so we didn’t hesitate, despite the initial shock of the cool water. And what fun we had!

In the Seven Secrets of Growing Your Bookkeeping Business seminar, Pete and I walk you through the stages of a typical bookkeeping business, where you’ll encounter issues and how to dodge bullets. We also spend time helping you identify your level of commitment to growing your business, which is the critical first step.

Attempting to grow your business by dipping your toe in without first having decided that you are 100% committed will mean that every time you encounter an issue, you’ll turn back, just like the couple who hadn’t decided if they really wanted a swim. You’ll continually battle with doubt and fear. You’ll tell yourself that it’s not for you and look for an easier option. On the other hand, if you’ve made THE decision, you have a big enough reason and you’re 100% committed you won’t let anything stand in your way.

Spend the time now deciding what you really want for your future and how committed you are to that. Once you’ve made the decision to grow your business you won’t hesitate to dive right in. 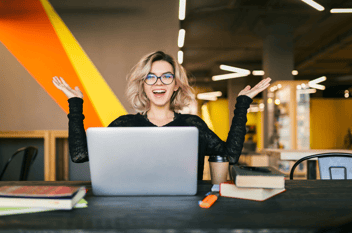 3 Ways you're Blocking your Own Success | Pure Bookkeeping

Are you prepared to get off the tools in order to grow your bookkeeping business?

I was mentoring a bookkeeper who was full up and fed up! She was working flat out for clients and...

Creating a powerful vision to grow your bookkeeping business

Pete and I flew to Perth from Melbourne to run the 7 Secrets of Growing Your Bookkeeping Business...